You might ask what’s with the name? The herb Thyme is a member of the mint family and as such is a very prolific plant. Additionally, there are hundreds of species of Thyme.  Thyme has been known since ancient times for its magical, culinary, and medicinal virtues. And its shrub like build offers shade and home to a variety of animal life. Tradition held that an infusion of thyme taken as a tea on midsummer’s eve would enable one to see the fairies dancing.

SO….In the spirit of the vast amount of knowledge, enrichment and nuances provided through study of the Qabalah, what better spelling for “Thymes” 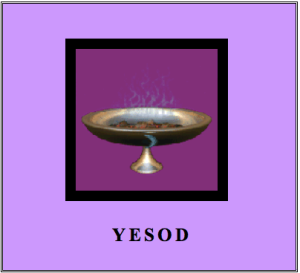 These are but a few of the many:

TOOL:
THE PERFUMES
THE SANDALS

ILLUSION:
SECURITY
KNOWLEDGE BASED ON EGO

What correspondences would you give based on your knowledge of the astral and dream world?

Another Leaf on the Vine….

The Sphere of Yesod and Awareness

…Awareness of our physical self and the physical plane leads to a quest to know that which is beyond. Knowledge of Self is the first step towards Gnosis.

From the Book of QBL

..From the mass of information which has been obtained by the parapsychologists, one definite fact has emerged; somewhere in the mental make-up of the individual there is a ‘dormer window”, looking out upon perilous seas and fairy lands , as well as upon scenes of glory and light.

The question which now arises in the minds of some parapsychologists is whether these talents belong to the past or the future of the race. Are they the remnants of a primitive faculty which was superseded by the use of more dependable means of communication by the spoken word or are they faculties which are latent in all and are now gradually evolved into active use?

The esoteric schools say this question can be answered either way depending upon the part of machinery of the mind which is being used. The faculties and powers usually termed psychic are and always have been part of the content of the mind but their mode of manifestation at any time depends upon the conditions under which it takes place. All sense impressions, whether physical or super physical come into waking consciousness through the levels of the mind which are usually know as the “subconscious” or “unconscious, and they are always colored and altered by their journey through their levels.”  Excerpted … Magic and the Qabalah by W E Butler

Yesod holds the potential of all that we wish, dream and desire to manifest in our lives. We look out at a star-filled velvety black night and wish upon a star…..

Starry, starry night
Paint your palette blue and grey
Look out on a summer’s day
With eyes that know the darkness in my soul
Shadows on the hills
Sketch the trees and daffodils
Catch the breeze and the winter chills
In colours on the snowy linen land

For they could not love you
But still your love was true
And when no hope was left inside
On that starry, starry night
You took your life as lovers often do
But I could have told you Vincent
This world was never meant for one
as beautiful as you